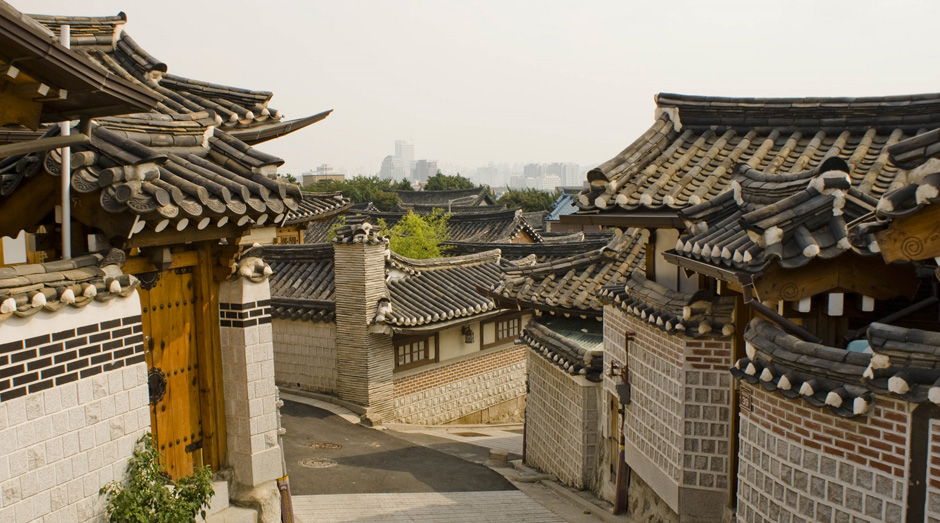 The history of the term “hanok” is not as long as is generally assumed as it was only coined after the arrival of the first western-style buildings in Korea around the end of the nineteenth century for the purpose of comparison between the two architectural heritages. It had not been necessary to use the term because almost all the houses built before the arrival of the Western-style buildings were “Korean houses”. It is generally agreed that the word was first used to refer to the traditional tile-roofed houses remaining in the area around present-day Jeongdong-gil together with newly erected Western buildings.

It was only as late as 1975, however, that the word entered the Korean dictionary with the definition, “A term used to refer to houses built in the traditional Korean architectural style in comparison with Western-style buildings.” (Samsung saeurimal keunsajeon, Samsung Publishing Company, 1975) The word was made by combining two Chinese characters, han (韓, meaning “the Korean people”) and ok (屋, meaning “house”), and accordingly, it is understood as the “house of Korea” or “house of Korean people.” While some argue that the use of the character han referred only to the short-lived Korean Empire (Daehanjeguk, 1897-1910), many believe that it was used to mean the entire Korean people or their land, rather than any specific state or dynasty, judging by the fact that it continued to be used even after the fall of the empire. Meanwhile, the character ok refers not only to dwelling houses but to buildings in general.

The word hanok, in fact, encompasses a variety of traditional Korean buildings which come in a great diversity of shapes and layouts according to the region and period, and many of whose origins are not clearly documented. The hanok has undergone numerous changes throughout its history, some significant, others not, and has continued to evolve as a result of outside cultural influences. Historians have presented widely different views about the origins and development of hanok, making it difficult to elaborate a simple, clear-cut definition.

Discussions about the term ‘hanok’ have been held by Korean legal authorities as well. According to the latest legal definition (Article 2, Act on the Promotion of Architectural Properties including Traditional Houses, Law No. 12739 of 2015), the “hanok is a wooden architectural structure built on the basis of the traditional Korean-style framework consisting of columns and purlins and a roof reflecting the Korean traditional architectural style.” The law also provides a definition of the term, “hanok architectural style,” stating that it can be used to refer to buildings featuring the shape and structure of a hanok even when built with modern materials and techniques.

Before the 2015 Act, the legal definitions of the hanok had been provided by local authorities. One such definition was given in 2002 when the municipal authority of Jeonju established the “Regulations on Support for the Preservation of Hanok in the City of Jeonju” as part of the effort to define the meaning of the “traditional urban hanok”. The movement was soon followed by the Seoul Metropolitan Government and the provincial administration of Jeollanam-do. According to the legal definition provided by the municipal authority of Jeonju, “traditional urban hanok” refers to buildings that feature, as and when appropriate to the District Unit Plan, traditional architectural elements such as the use of wooden structures and ceramic roof tiles, walls and gates (effective as of February 15, 2002). Meanwhile, the Metropolitan City of Seoul defines the hanok in the “Regulations on the Preservation and Promotion of Hanok in the Seoul Metropolitan Area” (effective as of March 24, 2016) as “an architectural work retaining the traditional architectural elements of the main structure, such as wooden framing and ceramic roof tiles, and the associated facilities.”
As these definitions suggest, the use of the term “hanok” is limited to buildings that are considered to be of value and preserved as public good. Accordingly, the standard of judgment for “hanok” are “tiled roof” and “wooden framing”, while the additional elements are “Korea’s traditional architectural aesthetics” and the “use of natural materials.

The term “hanok” was originally used to refer to all traditional Korean buildings, including the grand architectural works of royal palaces, Buddhist temples and Confucian shrines, but today its use is generally limited to private dwelling houses. Some prefer using it to denote thatch-roofed cottages (chogajip) and shingle-roofed huts (neowajip) in as far as they retain the traditional structure and appearance. A more comprehensive definition is provided by the Korean Association of Architectural History according to which the “hanok is an architectural work built on the basis of the Korean traditional wooden framework and spatial layout consisting of the traditional heating system (ondol), wood-floored main hall (maru), kitchen and the yard.” This definition highlights the importance of the structural elements of the hanok.

The term “21st century Seoul-style hanok” refers to the type of Korean traditional dwelling house designed and developed in Seoul to be better adapted to the natural and cultural environment of the city and to satisfy the different lifestyle and other cultural needs of its citizens in the twenty-first century.

While in the past the Korean traditional houses in Seoul were largely focused on performing multiple functions, including dwelling and other daily activities, and creating a community, either accidently or intentionally, and were better adapted to the given natural and cultural environment, the hanok of 21st-century Seoul tend to be designed to offer greater versatility, and to perform a wide variety of functions, public and private, more effectively, as well as to better meet the occupant’s residential and commercial needs. The 21st-century Seoul hanok also features more creative designs to help the owner enjoy a more comfortable and productive modern life. It can be divided into the following categories: