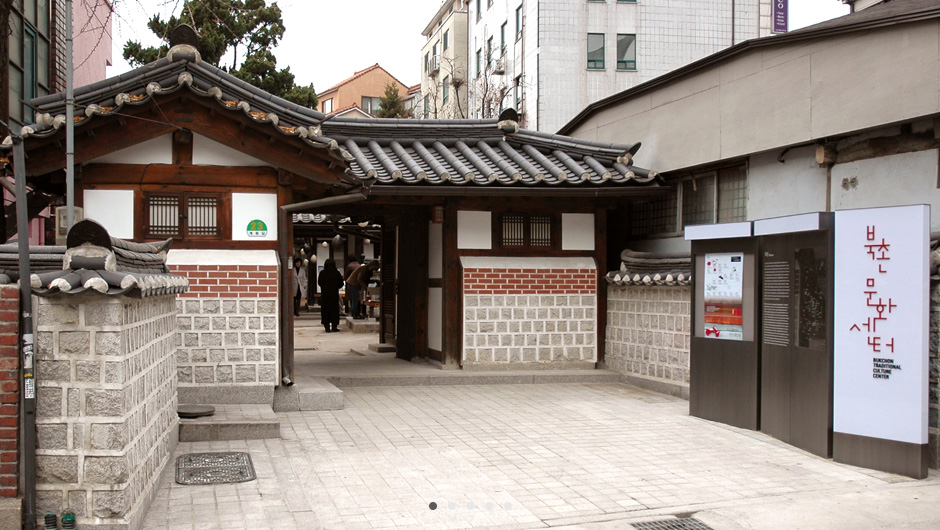 The Bukchon Traditional Cultural Center was established to promote Bukchon’s history and values, traditional Korean culture, and the meaning of Korea’s traditional residential culture. Opened in October 2002, the center has provided diverse traditional culture programs for domestic and foreign visitors as well as residents.

The center was established in the former house of Min Hyeong-gi, which has been designated as a “Modern Korean-style House in Gye-dong, Seoul” (Registered Cultural Heritage No. 229). Recently, however, historical research has been carried out on the assumption that it was the house of Min’s wife, Yu Jin-gyeong. It is said that the building used to be called ‘the house of Finance Secretary Min’ or ‘the house of the Lady of Gye-dong.’ It was originally composed of the anchae (women’s quarters), bakkatchae (outer quarters), two haengnangchae (servants’ quarters situated to the front and rear), and a shrine. According to the Hanok Renovation Standard Ordinance, it was repaired and renovated with the focus on preserving and restoring the hanok to its original state; and, as a part of the Bukchon Renovation Project, it is now being used as a resident community and visitor information center.

The Public Information Hall, established in the building space formerly used as the rear servants’ quarters, displays promotional materials about Bukchon’s history and values, screens videos made to raise awareness of the importance of preserving Bukchon, and provides various kinds of information about Bukchon including its traditional culture experience programs. The anchae located in front of the Public Relations Exhibition Hall serves as an office room, meeting room, and lecture room for traditional cultural classes, and also houses a sarangbang where residents can relax. Situated behind the anchae is jeongja (pavilion), which was originally a shrine but is now a relaxation space where visitors can enjoy a cup of tea in the cozy atmosphere of a hanok; and round the back of the pavilion is the byeoldang (separate house), which is run as a reception room for residents. The daecheongmaru (wood-floored hall) was established to provide experience programs designed to share traditional Korean culture with the public.
Service Guide